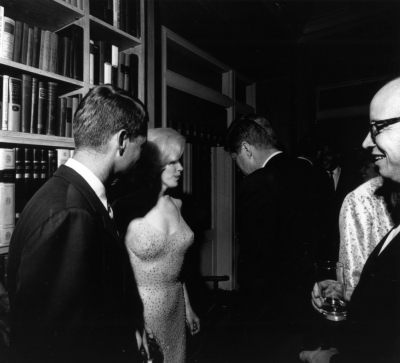 Oh Marilyn and JFK. It feels like the story that just won’t die. Did they “do it” or not? Did she “know too much”? Was she going to reveal all in a press conference? Were they planning on running off together or was that just a crazy rambling in Marilyn’s head? This one is going to be a pretty long (and controversial) one so stay with me. Before we begin, thanks to Marijane Gray and Laura Saxby. You saved me hours of reading. 🙂

“No serious biographer can maintain the existence of an affair between Marilyn and the Kennedys. All we can say for sure is that the actress and the President have met 4 times, between October 1961 and August 1962, and it was during one of those meetings, that they called to a friendly relation of Marilyn from a bedroom. Shortly after, Marilyn confided this sexual relation to her close relatives, insisting about the fact that their affair ended there”.

April 11, 1957 Marilyn and Arthur attend the April In Paris Ball as did John and Jackie Kennedy. Marilyn was photographed pretty extensively throughout the evening and no pictures show any of them meeting one another. 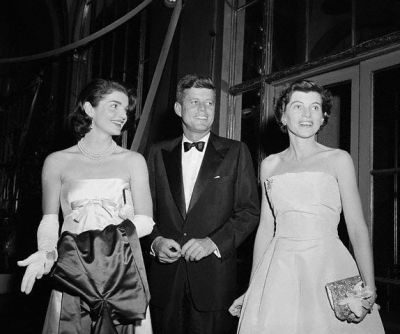 Keith Badman has Marilyn and Kennedy first meeting at Joe Kennedy’s home at Hyannis Port, Mass. This was on September 23rd and 24th of 1961. Jaqueline Kennedy was in attendance and so was Pat Newcomb. The Gazette-Mail states that an unidentified guest attended which may have been Marilyn but that cannot be confirmed. I personally also a bit unlikely being Marilyn arrived in New York to see Joe DiMaggio on the 22nd. She wouldn’t have had enough of a relationship with them to be flown in on a private plane and she most likely would have been spotted at the airport to fly to Massachusetts. 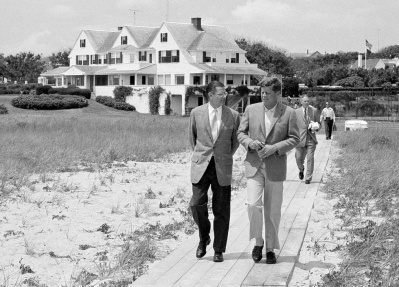 Keith Badman then has them meeting at a dinner party hosted by Peter Lawford on November 19th, 1961. This dinner is possible being Marilyn was friends with both Peter and Patricia Lawford. Kennedy had given a speech at the Hollywood Palladium on November 18th as well as a meeting with Adenauer, Chancellor of Germany.

December 5, 1961, JFK was in New York to make a speech at the National Football Banquet and Hall of Fame held at the Waldorf-Astoria in New York. Marilyn arrived two hours late being her hair had been styled by Kenneth Battelle.

March 24, 1962, This is the only possible day that Marilyn could have had a sexual liaison with JFK. Both attended a party at Bing Crosby’s home in Palm Springs. Marilyn called Ralph Roberts (her masseuse) from a bedroom to ask how to massage the President’s back. Marilyn later confided to Roberts that this was a one night stand and that it meant nothing to either party. Floyd Boring denies this ever happened. 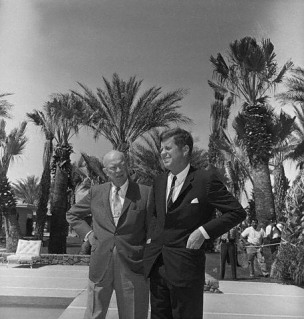 May 19, 1962, Marilyn sings to JFK at Madison Square Garden. This is the big one, a drugged up Marilyn singing a sexy rendition of “Happy Birthday” to the President of the United States that ends up publicly exposing their affair. A humiliated Jackie did not attend because she knew Marilyn would be there. Rehearsal photos show that Marilyn performed exactly how she wanted to. She wasn’t drunk or high that night, she was playing the part of Marilyn Monroe like she always had. 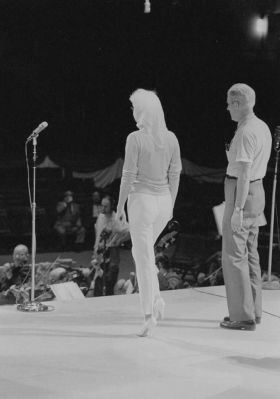 Jackie didn’t bipass the event because Marilyn would be there. She didn’t go because she was at the Loundoun Hunt and Horse Show in Leesburg, VA riding her horse Minbreno. She had been planning on attending this event for months.

Another comment that is often heard is that Marilyn was the headliner or grand finale. The fact is that she was neither, she was the fifth to the last performer from that night. 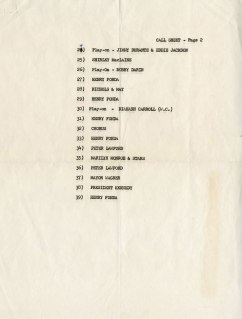 Well duh… she obviously went to meet with JFK afterwards. No, she didn’t. By all accounts, Marilyn was doting on her former father-in-law Isidore Miller the entire night. She then drove him home and went to her apartment where she met Ralph Roberts who gave her a massage until she fell asleep.

So? Maybe they spent the 20th together. Marilyn was picked up from her home at 1:30. She was back in LA by 10:00 pm. Kennedy’s schedule is really well documented this day. He had a speech that he presented at Madison Square Garden, a reception at Gracie Mansion at 5:37, and then returned to Washington D.C. to go to Glen Ora. The following day, Monday, May 21, 1962, she filmed some of her most beloved scenes in “Something’s Got To Give”. 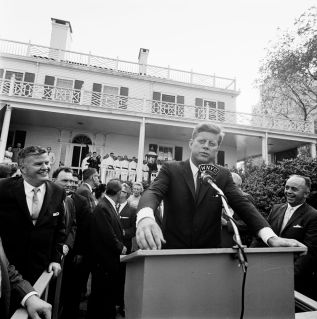 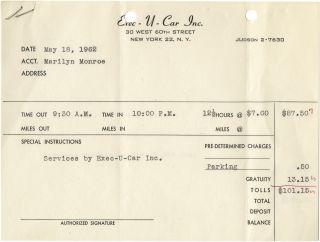 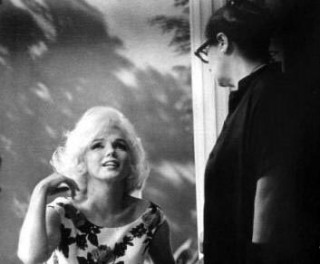 A lot of people also don’t realize that Audrey Hepburn sang for the President the following year. 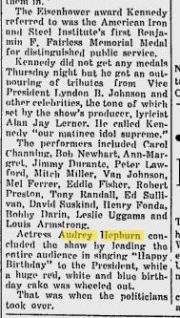 Another comment that is commonly said is that there were secret meetings. This is when we get into kind of a grey area. No one can be followed 24/7 but Marilyn and JFK were two of the most photographed people of 1960-1962. It’s highly unlikely that Marilyn would have been able to slip by completely unseen by a photographer. It’s the same for JFK. A few other dates have floated around over the years but comparing schedules shows that they weren’t in the same place and sometimes were on opposite ends of the country.

So where do these rumors come from???

Robert Slatzer! If you haven’t read my article about him please do. It will tell you a lot about his character and his lack of a connection with Marilyn Monroe.

In 1973 Robert Slatzer released his book

While rumors of Bobby had been floating around since 1962, no one had yet to put Marilyn with JFK. Slatzer was the first to testify that Marilyn had first had an affair with JFK and that he then passed her off onto his brother who soon dumped her as well. Hell hath no fury like a woman scorned and so Marilyn was going to air all in a press conference. Jeanne Carmen later came around and said that Marilyn had told her all of the same information. Later books then attest to Marilyn even calling Jackie and saying that she was going to become first lady. 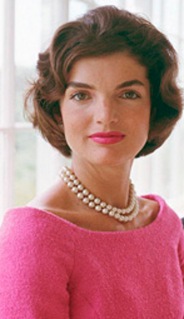 Again, Marilyn was a very private person. She also had maddening ambition and had clawed her way to the top. It took her nearly 10 years to start to get the roles she wanted. Marilyn had fought tooth and nail to get where she was. She also wasn’t stupid. Even when she was young and naive, she hadn’t done anything to risk her career when she had been tossed aside by Fred Karger. Marilyn would never host a press conference to let the public in on her life. She would have known that her coming out with such sensitive information would have made the public turn against her, the very same public she was trying to cultivate with her ongoing (and very public) battle with Fox.

Marilyn calling Jackie is also a bit asinine. Supposedly she told Jackie that she was going to become first lady. Marilyn wasn’t delusional. She knew that she would be painted as a home wrecker and never accepted as First Lady. Even if she had believed that Jack was going to leave Jackie for her (which is a GIGANTIC leap), Marilyn was not someone who gloated. Some people say she expected her relationship with Yves Montand to progress (a relationship we actually have proof of) yet Marilyn never called Simone Signoret to say she was going to be the next Montand. She also never did this with Arthur Miller’s wife Mary or Elia Kazan’s wife Molly.

The final claim is that Marilyn was “bumped off because she knew too much” yet no one can ever say what she knew. Judith Campbell Exner is someone who actually did see JFK (she has documents to support this) for 2 years. Judith definitely could have learned some government secrets and could have gone on to share them with Sam Giancana, whom she also went on to have an affair with.

Overall an affair with JFK is all based off of assumption. We have one disputed night that could have lent itself to a one night stand and that really is it. Marilyn’s days with JFK are pretty well documented. To believe anything else is going off of the words of Robert Slatzer, a source we can all agree is not reliable. Finally, I leave you with this quote by Susan Strasberg.