Marilyn and Robert Kennedy. Passed off onto the Attorney General after President Kennedy was through using her, as so many others before him had done. A desperate Marilyn called him repeatedly trying to rekindle the affair yet RFK was firm with her when he said it was over. A distraught Marilyn then told him she was going to reveal all in a tell all press conference. Bobby went to Marilyn’s home on August 4th and a) smothered her with a pillow or b) had Greenson kill her

Spoto could not word it better in this article from 1992. History does not support these asinine claims that originated with Dorothy Kilgallen on August 3, 1962. They went on to be drawn out into a slanderous pamphlet by Frank Capell that was released in 1964, 1967, and 1968. You can read more about Kilgallen and Capell in the archives. So what does history confirm for us?

Phone records for Marilyn were pulled from June 1 – August 18, 1962. We learn that Marilyn had 7 calls to Washington D.C. over the course of the month of July. This hardly constitutes a scorned lover bombarding the man who broke her heart with phone calls. Notice how all of the calls except for the two on the 17th are on a Monday. Being she had called him on the 16th it’s not a stretch that he asked her to call back on the 17th. The call on the 23rd would suggest that they didn’t talk or if they did it was incredibly brief. Thanks so much to Marijane Gray and Fraser Penney for sharing this. 🙂

Why the phone calls? RFK was making a movie with Fox. Most sources agree that Marilyn was trying to get him to put in a good word for her because of her being laid off. This isn’t improbable being she had reached out to Darryl Zanuck, the former head and majority stock holder of Fox, to speak on her behalf as well.

So… when did they meet (or supposedly meet)?

Mid October 1961 – Marilyn and Bobby supposedly both attended a dinner party at Peter Lawford’s home in Malibu. Marilyn drank too much champagne and was driven home by Bobby and his assistant Edwin Guthman a limo company. This is actually false. Marilyn wrote a letter to Bobby Miller on February 2, 1962 confirming her first meeting with the Attorney General. 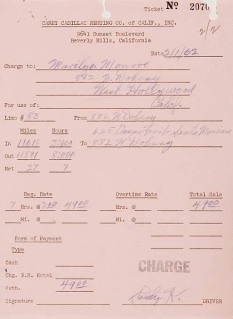 May 19, 1962 – Marilyn meets both Bobby and John at the Madison Square Garden Democratic Fundraiser for JFK’s birthday

Mid-June, 1962 – Marilyn is invited to Robert and Ethel’s home. This trip ends up being canceled by Marilyn on June 13.

June 26 or 27, 1962 – Marilyn supposedly sees Bobby one more time at Peter Lawford’s home. This has been proven to be untrue by Marijane Gray.

August 4th is shrouded in mystery. Was Bobby in LA? Was he in San Francisco? Did he come to Marilyn’s home? Did he not? The most common idea is that Bobby took a helicopter from San Francisco to Lawford’s beach home in Malibu. He then went over to Marilyn’s home to break off their affair (or her affair with JFK) and/or kill her. Bobby flew into SF on August 3rd with his wife and 4 of their children. They stayed at the home of a family friend, John Bates, in Gilroy, California. There are numerous photos from that weekend.

Bobby was there to give an address on August 6, 1962 to the American Bar Association. You can find the speech by clicking on the photo below:

The distance between Gilroy and Malibu is 260 miles by plane. While researching this article I had to find helicopter speeds. Most websites list 1960’s helicopters as topping out between 60-100 MPH. I’ll use 80 MPH for arguments sake. 3 hours and 15 minutes is how long a helicopter flight would have lasted. Putting aside the witness testimony that says Bobby spent the entire day of the 4th with his family, Bobby was reportedly at a dinner party by 10 pm that night. Add on the 15 minute drive each way and you have a 7 hour round trip. The very latest Bobby could have stayed was until 6:30, a full hour and a half to two and a half hours before Marilyn passed away.

So who are some of the that say Bobby was there that night?

Sam Yorty – The former mayor of Los Angeles. Sam and Robert weren’t exactly fans of one another. RFK and Yorty shows RFK being sarcastic with Yorty. Yorty is visibly defensive when RFK states that it sounds like he has nothing to get back to. While it’s presumptive to say that this alone would create animosity, I wouldn’t consider him to be reliable.

A Neighbor – This comes from Robert Slatzer’s book. Putting any doubts (and there are many) about Slatzer’s credibility aside, the neighbor states she was playing bridge with some guests in her living room that looked out on Marilyn’s entryway. Bobby parked his car down the street and went into Marilyn’s home “around dusk”. If this was true, why would RFK park down the street from Marilyn’s home when she had two wooden gates that insured his privacy?

The top question is “Did Bobby Come Visit Marilyn That Night?”

Sydney Guilaroff – Claims in his 1996 book “Crowning Glory” that Marilyn told him she told Bobby that she was going to expose all in a press conference. A press conference really isn’t that believable being Marilyn was a very private person. Guilaroff makes some ridiculous claims in his book. There are constant “I was there!” moments. It begins to feel like he was the basis for Forrest in Forrest Gump. No one can deny his place in Hollywood history but to always be there at the right time seems a bit improbable. One of his more outlandish claims is that he was sleeping with Garbo and Ava Gardner yet he was a known gay man as well as not being mentioned in Gardner’s posthumously released autobiography “Ava: My Story”.

Numerous other authors who have used unreliable sources like Slatzer, Capell, and Jeanne Carmen as well as random “sources” who have come out of the woodwork.

While it is impossible to rule out Bobby coming down to Marilyn’s home on August 4th, 1962 it’s unlikely that he did based off of travel time alone. While there is testimony of him being there, 99% of it comes from sources that most would consider unreliable. For Example, Jeanne Carmen has no known connection to Marilyn, JFK, or Bobby yet claims to have known all of them intimately. The only person who backs up her ludicrous stories is Robert Slatzer.  Frank Capell is the person to start these ludicrous rumors and they just persist.

Bobby was known to be faithful to his wife (with 11 children they obviously were close) yet the Marilyn rumors persist. Why it is so difficult for people to believe that Marilyn could have male friends of the opposite sex? According to her friends while Marilyn found Bobby to be a very interesting person, she did not find him attractive. Marilyn was not someone who threw herself at every man. She wasn’t incapable of being alone and if she was sleeping with anyone it was most likely Joe DiMaggio or Jose Bolanos.